I must be one of the few holders of an English degree who has never read Jane Eyre, Charlotte Bronte's iconic plain-governess-loves-brooding-employer story.  Somehow or other it was never assigned to me, and I never felt any inclination during the past 25 years to read it on my own.  But now I have read it, and my reaction is:  what took me so long?

I enjoyed this so much more than I thought I would.  I was expecting something darker and more labored, maybe more tedious than what I found, which was actually a very cerebral love story, told by a narrator who knows she has a good brain and calmly insists on using it.  Victorian literature keeps on surprising me.

The love between Jane and her employer, Mr. Rochester, doesn't hit them like a thunderbolt.  They neither of them find the other attractive at first, but they do find each other interesting.  They have long, amusing conversations through which their love grows:


"Not three in three thousand raw schoolgirls would have answered me as you have just done.  And then, after all, I go too fast in my conclusions:  for what I yet know, you may be no better than the rest;  you may have intolerable defects to counterbalance your few good points."

Melodramatic events keep them apart for a while.  We don't know what happens to Rochester during this time, but for Jane it's a period of hardships and patience.  She wanders, starving and begging for a time, is taken in by a pious and studious family, is courted by the son, St. John Rivers, finds a teaching position which she enjoys.

Just as we observed Jane's love for Rochester growing as she understood him better and better, we also follow her growing friendship with St. John, and see how knowledge of his character teaches her that she could not be happy married to him.


You should hear him himself on the subject:  he has again and again explained that it is not himself, but his office he wishes to mate.  He has told me I am formed for labour--not for love:  which is true, no doubt.  But, in my opinion, if I am not formed for love, it follows that I am not formed for marriage.  Would it not be strange, Die, to be chained for life to a man who regarded one but as a useful tool?

Not that Jane Eyre is without elements of mystery and fantasy.  The night before devastating events separate her from Rochester, she dreams of a child, and relates her belief that dreams of infants or children are always portents of disaster.  And her ultimate reunion with Rochester is effected through an apparently supernatural event.

This is a melodrama, a romance.  But the romance is between intelligent, interesting, and morally courageous people who make mistakes and learn from them. As someone who lives in possibly the least walkable city on the planet, this is a subject dear to me.  When I travel, I don't go to beaches;  I go to cities where I can walk.  Jeff Speck is an architect and city planner, and in Walkable City:  How Downtown Can Save America, One Step At A Time, he makes the case for cities serving the needs of people, not of automobiles.  In an engaging voice, he tells how our cities became unwalkable, why it makes financial, environmental, and health sense to make them pedestrian- and bicycle-friendly, and how it can be done fairly easily.
Posted by Amy at 9:09 PM 6 comments: Notwithstanding the picture to the right, which I chose because I like it, I did not read the full original text of Erich Maria Remarque's Zeit zu Leben und Zeit zu Sterben.  I read an abridgment for students published in 1961 with a dull cover that I couldn't find a picture of anyway.  The title translates to A Time to Live and a Time to Die, and it's a lesser-known (at least to me) work by the author of All Quiet on the Western Front.

A love for human beings and hatred of war run throughout Remarque's work.  I felt that even with my elementary knowledge of German.  Like the earlier novel, this one explores the terrible waste of war through the experiences of a young German soldier.  Unlike the first, this book is set during the second war, and its hero, Graeber, is profoundly anti-Nazi, although he fights in Russia.  The bulk of the book takes place while he is on leave in his hometown.  His time in Russia before and after his leave bookends the beginning and end of the story.

I had a fairly easy time reading this, no doubt because it was an abridgement, of course.  The occasional slang expressions were footnoted at the bottom of the page, and there was a glossary.  I found that I could breeze through parts which were straightforward narrative, but slowed down considerably in passages describing characters' thoughts, esoteric conversations, and descriptions of scenery, flipping back to the glossary frequently, because I wanted to understand the subtleties of thought and feeling.  Remarque gives close attention to his characters' inner lives, I suppose as a way of making us feel the tragedy of their deaths.  Here are Graeber's thoughts as he looks out the train window at the landscape of his childhood:

My translation (after looking up besturzend and Wiederkehr):

...it was the landscape itself, that suddenly spoke.  It came from all sides, sweet, disconcerting, and full of sudden memories.  It was not clear, it had nothing of reality, it was hardly more than the idea of return, not return itself;  but just because of that it was much stronger.  The dusky avenues of dreams were in it, and they had no end.

I struggled with gerade dadurch.  Gerade can mean "just," "straight," or maybe "immediately," in different contexts, and dadurch means "therethrough" or "through it."  In this passage it seems to mean something like "just through that," which sounds better as "just because of that."

Anyway, in my head, without trying to translate word for word, it was beautiful. 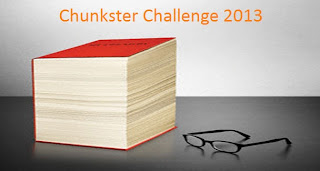 I do love reading challenges, but in  keeping with my decision to focus on reading from my own TBR list this year, I'm only joining challenges that will allow me to read books I already own.  And I have many "chunksters" on my shelves at home to be read.  Thus the Chunkster Challenge 2013.  In keeping with my other decision not to add time-sucking activities to what will likely be a very busy year, I'm going to join this one at the lowest level, the Chubby Chunkster, and commit to reading only four chunksters.  The rules:

The Chubby Chunkster – this option is for the readers who want to dabble in large tomes, but really doesn't want to commit to much more than that. FOUR Chunksters is all you need to finish this challenge.

The Plump Primer - this option is for the slightly heavier reader who wants to commit to SIX Chunksters over the next twelve months.

Mor-book-ly Obese - This is for the truly out of control chunkster. For this level of challenge you must commit to EIGHT or more Chunksters of which three tomes MUST be 750 pages or more. You know you want to.....go on and give in to your cravings.

A Tranquil Star--Stories by Primo Levi
This is a collection of Levi's previously unpublished stories, written between the 1940s and the 1980s.  The style and themes are all over the place--memoir, fantasy, satire.  One I found particularly moving was "Bear Meat," an old man's memory of the physical and mental tests and rewards of mountain climbing in the Italian alps in his youth.

The Birds & Other Stories by Daphne du Maurier
I recently discovered that Hitchcock's film The Birds was inspired by a story by Daphne du Maurier.  "The Birds" is the first story in this volume, and it was fairly chilling, if a bit abruptly ended.   I can't honestly say I enjoyed the other stories much, though;  they seemed to strain a bit for effect, and were darker than I like, even to the point of being depressing.
Posted by Amy at 10:52 PM 3 comments: